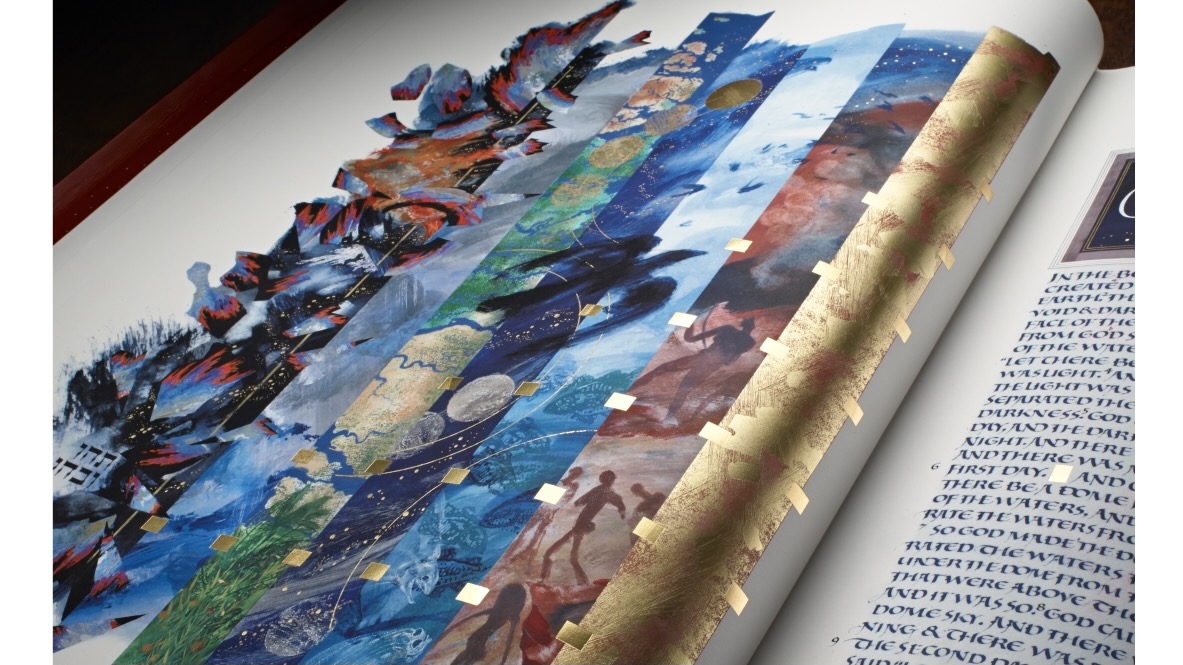 The Word Come to Life: An Exhibition of The Saint John's Bible

Every Thursday from 1pm-3pm during the exhibition, there will be a guided experience with select volumes of the Heritage. Everyone is welcome to join in for this weekly session guided by Daniel Melville Jones.

This contemporary illuminated Bible was created by a group of 23 scribes, artists and assistants in a Scriptorium in Wales under the artistic direction of Donald Jackson, Senior Scribe to Her Majesty Queen Elizabeth’s Crown Office at the House of Lords. The team worked in conjunction with a committee of theologians, scholars and artists from Saint John’s Abbey and University in Collegeville, Minnesota. After fifteen years of work, the pages were completed in 2011 and given a permanent home at Saint John’s Abbey and University. The Saint John’s Bible incorporates many of the characteristics of its medieval predecessors: it was written on vellum using quills, natural handmade inks, hand ground pigments and gild such as gold leaf, silver leaf and platinum. Yet, it employs the modern, English translation the New Revised Standard Version (NRSV) as well as contemporary scripts and Illuminations. The prints displayed in this gallery showcase a small sampling of the approximately 160 illuminations in the completed work.
Creation, Donald Jackson, Copyright 2003, The Saint John’s Bible, Saint John’s University, Collegeville, Minnesota, USA. Used by permission. All rights reserved.

Donald Jackson is one of the world’s foremost Western calligraphers. At the age of 20, Jackson was appointed a visiting lecturer at the Camberwell College of Art, London. Within six years he became the youngest artist calligrapher chosen to take part in the Victoria and Albert Museum’s first International Calligraphy Show after the war and appointed a Senior Scribe to Her Majesty Queen Elizabeth’s Crown Office at the House of Lords .

As a Senior Scribe to Her Majesty Queen Elizabeth’s Crown Office at the House of Lords, he was responsible for the creation of official state documents. In 1985, he received the Medal of The Royal Victorian Order (MVO). Jackson is an elected Fellow and past Chairman of the Society of Scribes and Illuminators, and in 1997, was named Master of the 600-year-old Guild of Scriveners of the city of London. He is the author of The Story of Writing. Jackson and his wife Mabel live and work in the Hendre, a converted town hall and outbuildings in Monmouth, Wales.